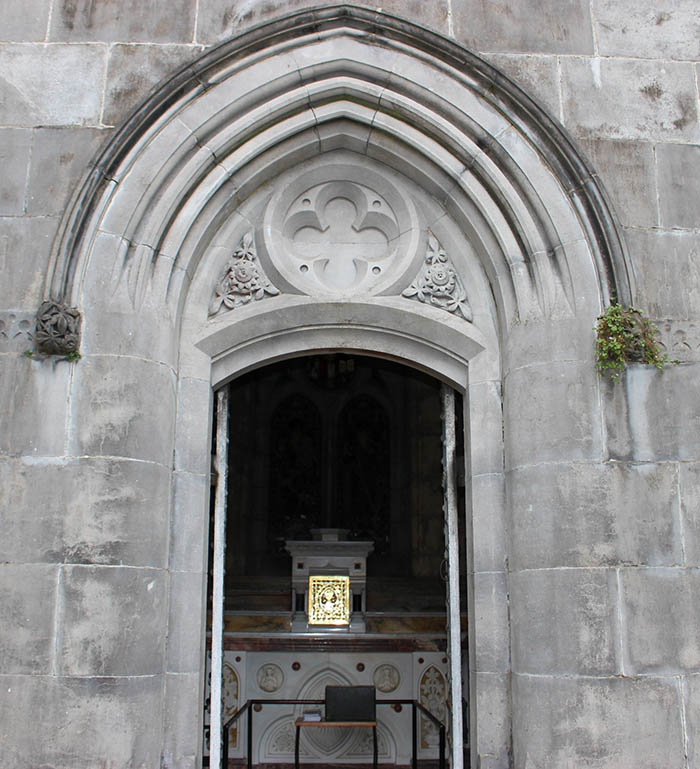 A remarkable example of a mans deep affection for his wife is to be found at Carrick-on-Shannon County Leitrim, in the Costello Memorial Chapel, reputed to be the second smallest chapel in the world. Only in the Holy Land is their said to be one tinier; certainly the Building is unique in this country and is considerably smaller than the smallest similar structure in Britain. The Chapel is sixteen feet long by twelve foot wide and thus covers an area of 192 feet. The smallest in Britain for which a restoration and preservation fund has now been opened, is at Upleathan in Middlesborough and measures sixteen feet by fifteen or 270 square feet. It is then 78 square feet larger than that at Carrick. The Costello Memorial Chapel was erected by Edward Costello to mark his devotion to his wife, who died in 1877 at the age of 46. Mr Costello had been a substantial farmer at Dromore a few miles from Carrick, but had moved to the town during the early part of the 1800’s and set himself up in business. He was widely known as a man of great kindness and charity and was partly instrumental in bringing the marist order of nuns to the town.

On the death of his wife, Mary Josephine, he had work on the memorial Chapel started. It was to be both a monument to his love and a last resting place for his wife and himself. The little building was dedicated on Aprill 22, 1879 and after the consecration ceremony, the body of Mrs Costello was placed in a sunken space to the left of the entrance, and covered over with a thick slab of specially made glass. The body, which was interred in a metal coffin, had been embalmed when Mrs Costello died, and had been cared for in the interim by the marist nuns. Mr Costello himself died in March 1891, and his remains also in a metal coffin were placed in a sunken space to the right of the entrance. A thick glass lid was placed over this vault too, and today the inscriptions on both coffins can be read with the aid of a torch. Mass was celebrated in the chapel on every first Friday from the time of its consecration to Mr Costello’s death, but no religious service has taken place in it since. The chapel now lies tucked in between two more recent buildings within a few yards of Carrick’s most prominent landmark, the town clock.

In the distant past, the old court-house, where 19 men were hanged in 1798, stood on the site, subsequently it became the property of the methodist trust, which erected a Wesleyan chapel there in 1820. Edward Costello acquired possession in later years, and when his wife died, he earmarked a portion of the site for the memorial chapel. The buildings on either side have ruined the perspective, but the little structure remains of very great interest and is visited by these tourists who hear of it by chance. The entrance gate stands between two handsome stone cut pillars and on the front gable of the building on either side of the door are a raised monogram with the letters B.M.C. and the Costello arms with the motto “Ne te quaesiveris extra.” The interior, including the roof, is lined with bath stone, which continually hardens under the action of time and air. The marble altar remains, but, the altar plate was long ago handed over to the catholic church in Carrick.